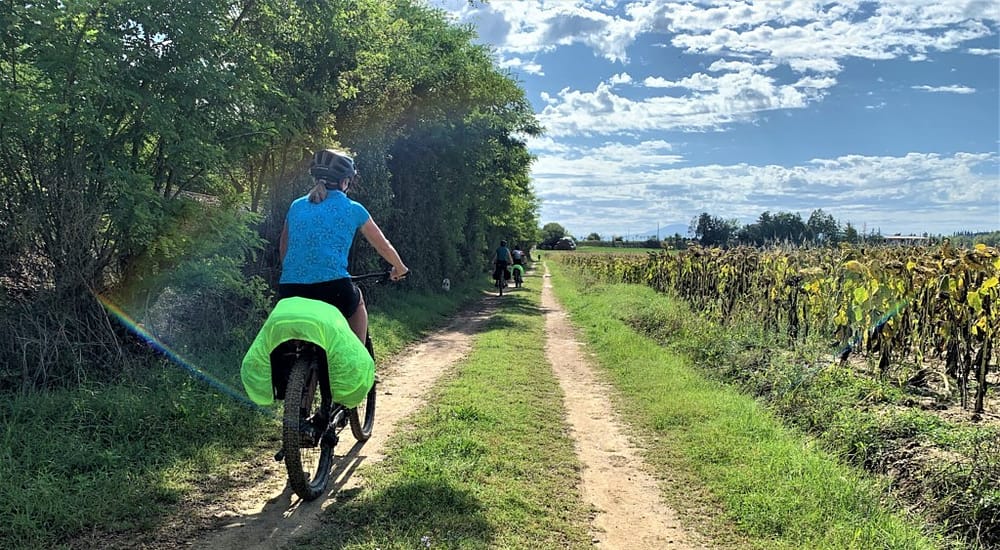 Why should walk Via Francigena?

Via Francigena, a journey of a lifetime. A transformative experience.

Every new journey is an experience that makes us “new”, “different”. Unaccustomed to silence, to concentration, this itinerary on the Via Francigena wants to create opportunities to experience these forgotten sensations. Travelling means getting involved.

The stories of those who have traveled the Via Francigena are always different to the point that sometimes it is difficult to understand that the stories refer to the same path. Such different descriptions can only be justified by the interpretation of each of us of this trip. Also the lights and the shadows that are spread on this path contribute to create atmospheres able to suggest us, making us navigate, in the ocean of our thoughts.

It is exciting to know that this ancient path, which we are traveling by bike or on foot, has been traveled for tens of centuries by pilgrims to reach Rome, but also by soldiers, merchants and armies. At that time, it was a difficult path due to the impervious nature, with threatening marshes and impenetrable woods, often home to bandits. It was for this reason that many variations were made of this route, with the aim of devising increasingly easier and safer routes.

For the most part unpaved, the Via Francigena connected, for the first time, cities and small medieval villages enabling the circulation of ideas, discoveries, inventions, allowing different cultures to come into contact favoring the cultural mix and an economic development without precedents.

Following Via Francigena from Lucca to Radicofani, wonderful cities like Lucca, San Gimignano, Siena that we meet along the way – just to name a few – take on an extraordinary character.

These villages, with their stories and their ancient flavors, enchant us and, once again, arouse the desire to discover, to learn, to taste.

Lucca is our preferred starting point for exploring the stretch of the Via Francigena that crosses Tuscany.

Lucca is a city where the silence has an ancient flavor. Protected within its walls, there is no room for hectic life. In the Middle Ages Lucca grew thanks to its strategic position that made it a fundamental hub until it became the capital of the Grand Duchy of Tuscia (Etruria, land of the Etruscans). Definitely one of the most beautiful Italian cities with architecture, churches, museums that know how to enchant.

The tradition of hospitality is part of the DNA of Altopascio, a very small village near Lucca.

The hospice of Altopascio generated the order of the Knights of the Tau, probably the oldest religious knightly order in Europe.

San Miniato is a small medieval village with a strong military layout. A slow walk in the central street full of small craft shops is relaxing.

From San Miniato we head towards San Gimignano, also called the “Manhattan of the Middle Ages” because of the very tall towers that rise above the ancient village.

The small historical center, unchanged from the XIII century, enchants for its rare beauty. The history of San Gimignano is intertwined with the Via Francigena; it was thanks to this new communication route to the European market that became accessible for its products such as Vernaccia and Saffron. The tower-houses (originally 70, today 15) represented a tangible symbol of a mercantile aristocracy. The decline of San Gimignano was marked when the Via Francigena was moved to the valley, thus cutting this village off the trade route.

Here is Monteriggioni, which emerges from the countryside with exceptional visual impact.

This small military village located on top of a hill, preserves intact the XIII century city walls with 14 towers. Monteriggioni was founded by the Siena in the XI century as a defense against the invasions of the Florentines.

Siena, during the XII and XIII centuries, was in constant rivalry with Florence.

Crushed by political problems and by the black plague that decimated the population in 1300, the city was able to recover but around year 1500 Siena got occupied twice by the Spanish rulers. From 1500 Siena became part of the Medici dominion. Enchanting.

Buonconvento, is a fortified complex of the fifteenth century and worth a stop.

Born as a trading village, it developed thanks to the flow of travelers on the Via Francigena. The Sant’Antonio Abate hospital is located in the center of the ancient village, today it is a museum of sacred art.

San Quirico d’Orcia is protected by a wall from the 1400s to defend the village.

Houses an ancient Romanesque church from the XII century, erected just where the Via Francigena passed. The tiny historic center is well kept. The Art Park is worth a visit, set up in the elegant Italian garden.

Radicofani is the last stop on this journey, which is reached after long stretches that cross majestic and solitary places.

The village, located on top of a cliff, reveals a medieval soul. Its Romanesque church of San Pietro (XIII century) is beautiful.

By bike  Via Francigena is feasible with daily stops of about 50 km. (31 mi). On foot the daily distance is halved.

For more information contact us, we will be happy to help you.